I never meant to blog about itty-bitty cars, but sometimes things just happen. Perhaps if I had a kitten to play with, or a horse that needed riding…  I had to find a horse to ride, to be sure, but the little blue car found me.

my Isetta getting a green energy transfusion

DEAR FRIENDS and WILLOWTANGO.ME FOLLOWERS: Hundreds of you are responding to this post as if it’s the only post you can see!! If you like this post and want to read more, go to <willowtango.me> And please, no responses marketing your product line or personal fetishes!!

No, it’s not my Isetta.  If it was I would spoil it with some much-needed TLC. Please note that the front of the car doubles as the entry. This baby is a one cylinder, 4-wheeler ragtop. Here she is cuddling up to a pickup. How cute is that?

which do you like better, the front or the rear?

Ben discovered it while walking from our apartment to his Spanish class in Palermo Soho.  Apparently it’s parked in some kind of cosmic waiting room, patiently awaiting restoration and rebirth.  Perhaps its mantra could be… I’m so cute I can tango on 3 wheels?

sweet view from a wabi-sabi world

There can’t be very many of these microcars left.  But thousands were produced in post WWII Europe.  Skip the next paragraph if you’re not totally fascinated by this Barbie car.

The Isetta was an Italian-designed micro-car built in a number of different countries, including Spain, Belgium, France, Brazil, Germany, and the UK. Produced in the post-World War II years, a time when cheap short-distance transportation was most needed, it became one of the most successful and influential city cars ever created.

The car originated with the Italian firm of Iso-SpA. In the early 1950s the company was building refrigerators, motor scooters and small three-wheeled trucks. Iso’s owner, Renzo Rivolta, decided he would like to build a small car for mass distribution. By 1952 the engineers Ermenegildo Preti and Pierluigi Raggi had designed a small car that used the scooter engine and named it Isetta—an Italian diminutive meaning little ISO.

The Isetta caused a sensation when it was introduced to the motoring press inTurin in November 1953. It was unlike anything seen before. Small (only 2.29 m (7.5 ft) long by 1.37 m (4.5 ft) wide) and egg-shaped, with bubble-type windows, the entire front end of the car hinged outwards to allow entry. In the event of a crash, the driver and passenger were to exit through the canvas sunroof. The steering wheel and instrument panel swung out with the single door, as this made access to the single bench seat simpler. The seat provided reasonable comfort for two occupants, and perhaps a small child. Behind the seat was a large parcel shelf with a spare wheel located below. A heater was optional, and ventilation was provided by opening the fabric sunroof. The first prototypes had one wheel at the rear; this made the car prone to roll-overs, so they placed two rear wheels 48 cm (19 in) apart from each other.

BMW bought the Isetta license from ISO SpA in 1954.  They bought the complete Isetta body tooling as well.  The BMW Isetta was in 1955 the world’s first mass-production 3-Liters/100km car. It was the top-selling single cylinder car in the world, with 161,728 units sold. After constructing some 1,000 units, production of the Italian built cars ceased in 1955, although Iso continued to build the Isetta in Spain until 1958.  (compiled from Wikipedia)

Even in its present sad condition, this Isetta has a bright future!  and is probably worth a few bucks.

Do you see the little face?

So sweet of the man in my life to take these photos for me.  You could say he found a clever way to get back in my good graces, after a little spat about who knows what?!  Here he is asking for forgiveness:

on his knees at the Gallerias

Not blue anymore, but wearing blue! at our favorite café by Plaza San Martín:

Now we’re going on a day trip to the Pampas! First stop, San Antonio de Areco, about 120 km. northwest of Buenos Aires. This beautiful colonial pueblo was settled in 1730. The bici is not quite that old!

The bici decorates the sidewalk in front of one of the best trattorias in town, La Esquina de Merti. My hosts, Flavia and Fabio, who also happen to be our landlords in town, brought me out to the country for an afternoon of sightseeing and horseback riding. Here’s the beautiful shady plaza: 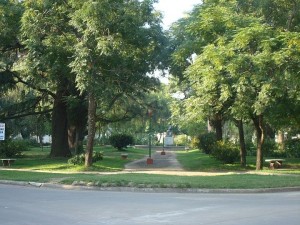 A typical street on a very quiet day in San Antonio de Areco.

The church looks like an vacant gray stone palace.  Spooky and grim, even in the sunshine!

It’s prettier on the inside. The main altar is quite beautiful. We were the only people inside the church, on a Tuesday about 1:00 pm. This town is definitely not overrun with tourists! Maybe on the weekends.

Flavia and me sightseeing

We were fortunate to find the leather shop open. Besides the handmade leather goods, there were bridles, reatas, cinchas, stirrups, tapaderos, ponchos… lots of stuff. Many of the tools hanging on the wall or lying about the workshop were antiques still in use. We chatted with the craftsman at his workbench, and he showed us how he stamps a design into leather using a metal punch. 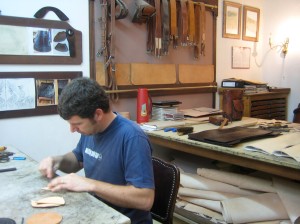 the artesano working at his trade 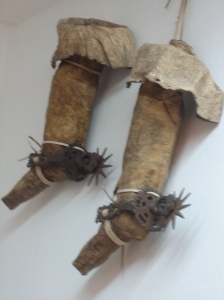 In the really old days (we’re not talkin’ 1950s here! more like 1750s!) out here in the pampas, they didn’t have boots. They just wrapped rawhide around their legs and feet. They left the toe part open cause back then their stirrups were a rawhide reata hanging down from the saddle with a big rawhide braided knot on the end that you stuck in between your big toe and second toe. Kind of a toe wedgie! Doesn’t sound as comfy as a real stirrup, does it? Of course they didn’t spend a day’s wages to have their horses shod, either. Come to think of it, the campesinos back then didn’t get paid wages at all. That was back in the days before organized labor.

Rawhide, when it’s wet, can be stretched taut (as in drum making); when it dries, it’s stiff as a board and extremely sturdy. You can cut it in a giant spiral which results in narrow strips anywhere from 30 – 60 feet long depending on the size of the hide. Braiding a number of those strands together creates reatas, reins, bosals, bridles, etc. All the gear you ever dreamed of having!

These are the saddles we’ll be riding later today. No frills, no saddle horn, either. In an emergency, just grab some mane!

a Chilean saddle: no frills, wooly sheepskin keeps you warm

As we drive into the rancho the first thing we see is a bunch of horses tied up amongst the trees: 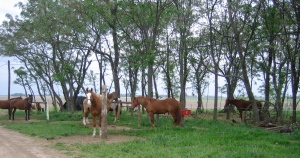 all tied up and waiting to be ridden

we go past a marvellous treehouse!

Pulling into the stable area the horses in the barn stick their heads out to see who’s coming: 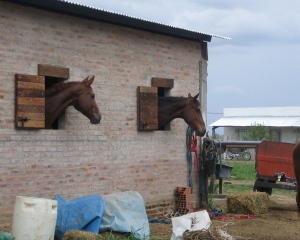 The barn is new, built of cement and brick, with a metal roof. It has 5 stalls, a tack room, a bathroom with shower, and a tiny kitchen area with sink. The stall doors are wood, as is the framing and the shutters.

the front of the barn

We saddled up and went for a ride!  The sun was playing tag with the clouds, but it was warm with a slight breeze. Everywhere you look it’s green! We were about 60 or 70 miles northwest of Buenos Aires. Santiago is wearing polo boots and riding britches; he competes on the hunter-jumper circuit.

Flavia is our horse-crazy landlady!  She and I hit it off from day 1. Here she is on a pretty red dun, holding his head very nicely.  The helmet protects her coco loco. She and I could sit and talk horses all day long.

Flavia on a red dun

Here I am on a nice little grey gelding. When we were just walking along he wanted to lag behind the pack, but when we were loping, he moved right up to the front every time!

We rode for about an hour and a half. By the time we came upon this windmill and got thru the gate, we could see the clouds piling up. The rain was comin’! 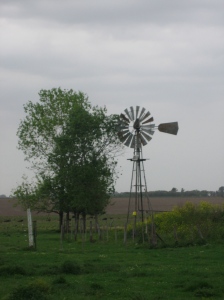 We kicked our horses into gear and loped the last few hundred yards in the rain. Now that’s my idea of fun! After we unsaddled and got the horses put away, we hunkered down in the barn in some comfy canvas chairs to dry off while our host brewed up some mate. We passed it around, sucking it down thru the silver bombilla. Good medicine. This was our view out the barn door: 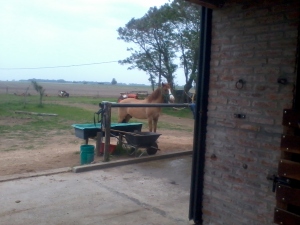 You can just barely make out a gorgeous caballo criollo in this stall:

I like the clean, earthy design, but… but what if your horses decides to punch a hole in it with a double-barrel kick?  Here’s the ranch manager’s casita: 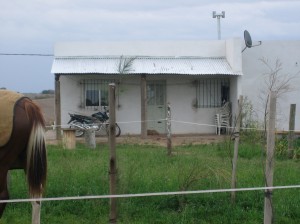 see the tri-color tail on the left?

I have to share a funny comment from my brother Kim:  “Hi Sis, I am really enjoying your tango blogs…  You are a great writer!  Not a bad photographer either (must have gotten that from Grandpa).  In the future please try to provide more photos of beautiful women instead of just guys, cowboys, etc.”

Okay, bro, this one’s for you!  Ciao from Buenos Aires!