Barcelona is home to one of the most beautiful concert halls in the world: el Palau de la Música Catalana. The Palau is one of the most brilliant examples of Modernist architecture anywhere. Absolutely stunning! I count myself very fortunate to have seen it, and extra lucky ’cause I got to see a fabulous Flamenco performance there as well.

The first modernist “curtain wall” is about 5 stories tall: a compelling contrast of modern and traditional. Catalan modernismo was a very local, very Barcelonesque architectural movement which had its roots in the industrial revolution of late 19th century Spain. In Catalonia the modernist movement went even further and developed a local style and personality, sprung from the Renaixença, the Catalan language and cultural renaissance. Modernismo was a natural response to the unprecedented urban industrial development occurring at that time, and not just in Spain, but all over the developing world. Like the recycling of Barcelona’s waterfront for the 1992 Olympic Games, the Barcelona Expo of 1888 created a big push to update and urbanize the city. This artistic movement became known as Art Nouveau in Europe. Smart people argue about when and where Modernismo (or Art Nouveau) originated, but by the Paris Expo of 1902 it was everywhere.

Designed in the Catalan modernist style by architect Lluís Domenech i Montaner, the Palau was built between 1905 and 1908 by a local choral society, the Orfeó Catalá. I find it amazing that a humble choral group became a catalyst  in the Catalan Renaixença. 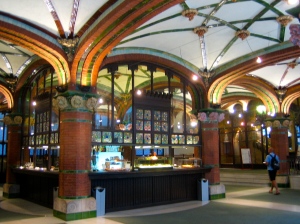 Aren’t we in Middle Earth? Isn’t this Olde Elvish design? 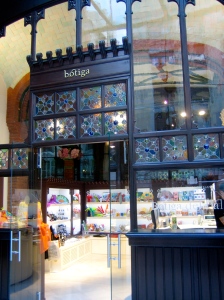 Oooh, if this isn’t the place to go for silk scarves and handpainted silk fans… gorgeous and very pricey! And loads of exquisite glass and ceramic items, jewelry… plus a whole room of art books. Truly just a light veil separates heaven from earth!

It’s anybody’s guess what the ceiling motif is all about… silk fans? giant moths? flowers? Well, guess again… the book I brought home from the gift shop says they’re open tulips. An unbelievable fantasyland of the decorative arts! Everywhere you look are forms and shapes taken from Nature with a capital N. Catalan artists created their own language of symbols inspired by organic shapes and patterns from the natural world: birds, butterflies, leaves, flowers, not to mention fantastical animals and people. Like when you cut an apple in half crosswise, what do you find…? a star! Of course these photos are only a hint, a glimpse… you’ll just have to go see for yourself!

the dark blue windows are just what they seem… evening sky

The Palau has been called a “box of light.” Can you imagine the hours of work that went into creating the colored glass, the mosaic and crystal ceilings? In Catalonia, the middle class saw in the new architecture a way of placating their unconscious anxieties about modernization. All those noisy, dirty, annoying machines, motorcars, trains, foundries spewing smoke, steam engines… the transition from old world to modern world was kind of stressful back then, and these days, with exponential change by the nanosecond, I guess we’re still running on that same treadmill, trying to catch up to a world that keeps on moving just out of reach. 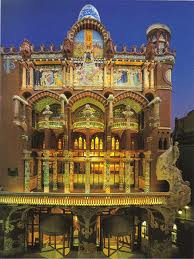 Yet the Modernist movement was also a way for people to express their Catalan identity and spiritual roots, while displaying their newly-acquired bourgeois sensitivity to culture and the arts.

are you wowed yet?

not quite a full house, but a most appreciative audience

The rich decoration of the façade of the Palau, using elements of Spanish and Arabic architecture, blends harmoniously with the building’s structure. The exposed red brick and iron, the mosaics, the stained glass, and the glazed ceramic tiles give a feeling of openness and transparency. An enigmatic group of sculptures symbolizing Catalan music on the corner of the building keep watch over a busy corner, just a few blocks away from the Plaça Catalunya.

Prancing horseback Valkyries at the tops of columns frame the stage, while goddesses in bas-relief emerge from mosaic walls, each playing a different musical instrument. It’s wild!

How can I transition to Flamenco after the Palau? A herculean task, and after all I’m just a girl! But I can testify that Catalans love their flamenco!  I’ll just post a couple of photos so you can get the drift… an evening of Flamenco at the Palau: 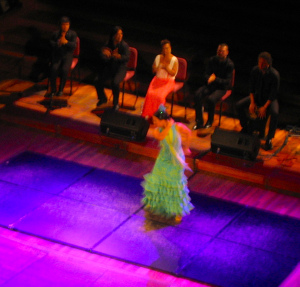 The raw emotion of Flamenco, the dancer giving her all, the singer spilling out his guts, the complex rhythms which take you over completely; you are imprisoned, enthralled!

When a dancer locks in your gaze, you can’t escape… even your breathing syncs with the dance; the compás of cajón, tacos, palmas and your heart; the singer pouring out her soul, the melodic complexity of the guitar that takes you far away…. the clicking of the castañuelos carved from ancient rosewood… Flamenco is insurmountable! It’s a mountain and you’re walking up the narrow path… it’s the ocean and you’re a tiny shell tossed around on the waves. Flamenco is only rivaled by Tango in my universe of music addiction. This is a perfect segue way to Tango, but not tonight. It’s 3 am and this girl’s gotta get some sleep! Adíos, que les vayan bien! Hasta luego! Vale? 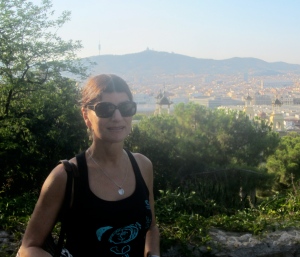 P.S.  I almost forgot to mention that I changed the name of my blog to Tango Awaits You. Why? Because El Tango Nos Lleva was all about us and our Tango travels, but now it’s about YOU, dear reader, about the possibility of Tango in Your Life! Yes, YOU! Tango is out there, waiting, it will never go away, it will always be there, ready to plug you into the endorphine-producing ecstasy of dancing Tango. You might as well get started now… why wait? And I decided to put the title in English, since lots, though not all, of my readers are English-speakers. Personally, I prefer Spanish, in fact they tell me I’m much friendlier in Spanish (like, not a bitch?), that I’m downright warm and fuzzy in Spanish, but this blog’s for YOU! My friends and family! So there you have it, Tango Awaits You!! And thank you all so very much for all your comments and emails. It helps when I feel homesick for California!