No, I haven’t taken up cart-driving.  (Although that could be fun!)  Nor have I started up my own recycling delivery service:

The streets are crowded with people and traffic,  aplastada like an empanada is my subway haiku, taxis cost money (but not that much), buses are fun if you like to window shop while standing, so why not ride a bike?  Cause it’s suicidal, that’s why!  But what about the beautiful parks?  They can’t be all that dangerous….. right?  It’s just getting to them that can be tricky.  Fortunately,  you don’t need your own bike, there’s a citywide Sustainable Mobility Plan.   So one pretty day we set out to ride bikes, but the closest Bici Station, at the Plaza Italia, was closed.  A week passed before we went back, only to be informed that we needed to sign up first.  Sure, let’s sign up!  Easy, right?  ha-ha!  First we need your ID, your passport,  a document from the local police certifying your residence, and your firstborn child’s bank account access code (sorry, Ode!). 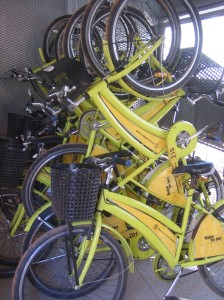 We went to the closest comisario de policia , across from the Plaza Italia, but were told we had to go to our neighorhood comisario which is a few blocks in the other direction.  That was a tough blow to our bike ride plan, so we went for a nice walk around part of the park instead (the Palermo bosque is the size of Golden Gate Park) but the wind kicked up and pretty soon we had to break for pizza and coffee.  A few days later we went for a walk and, thanks to a friendly sidewalk flower-seller, found our local comisario.  They have a casual waiting room with blue plastic seating and a flat-screen tv to keep visitors occupied (like turning on the tv to keep the kids quiet).  We handed over our pasaportes to the pretty cop with hair down to her waist and a big semi-auto on her hip.  She logged in all our info and told us to come back the next day to pick up our certificates (cost: 10 pesos each).  The next day we went back and a big male knuckle-dragger informed us that our certificates would be delivered the following monday morning.  Monday afternoon we went back to the comisario to let them know that our certificados de domicilio had not, in fact, been delivered.  We were told that, yes, the logbook showed that the certificates had been delivered, probably to the doorman of our building.  It was suggested we speak with our doorman.  We asked Santiago, our friendly doorman, about it and he said he had not received anything for us.  Ben ranted and raved about South American bureaucracy for a while, I finally quieted him down with a glass of wine and some bread and cheese.  (However he did like the first officer and gave her a commemorative SLO County Sheriff’s Star.)  Lo and Behold, the very next morning the buzzer rang, it was a police officer letting me know he was sliding our documents under the front door of our building.

A few days later Ben, on one of his Search & Rescue missions, found an open BikeShare stand in Las Heras Park, so we went over there armed with documents in order.  The nice young kids had their laptop up and running and they had us signed up in a jiffy… almost!

But, alas!  they didn’t have a functioning printer so we couldn’t get a couple of bikes just yet.  We decided to hoof it over to the Plaza Italia bici station, their printer was supposed to be working.   About 10 minutes later we made it over there, their printer was working but they were out of paper.  I suggested they used look in the trash to find a usable piece of paper with a blank side as yet unprinted, meanwhile Ben was ready to buy some paper, but it was suggested we try the next bici station, only about 10 minutes farther on.  Meanwhile the sunshine tangoed with the clouds and wind, and I was glad I had worn my tennies, leather jacket and cap.

At the third bici station, we were finally able to get our documents printed and signed.  We received the short version training on checking out a bike and a helmet if you want one (in the contract it says you have to wear one but in reality if you want to crack your coco that’s your choice).  So we went for a ride!  Yahoo!  We blasted up Libertador past the Facultad de Derecho, and turned up Scalabrini Ortíz.  Ben led me through some really scary intersections, but we finally made it back to the Las Heras bici station, dropped off the bikes, and walked over to a nearby café to warm up with coffee and a snack.

Spring will be here in just 2 days and I am looking forward to warmer weather, bike rides, runs in the park, and outdoor milongas.  I’m looking forward to walking around town in sandals and a tank top, and having gelato at a streetside café at midnight on my way to a milonga!   I have another post with photos of live tango orquestas coming out very shortly, so stay tuned!  Ciao from Buenos Aires!

One thought on “I’ve Developed A Dangerous New Habit”