Paris is positively popping with Tango! Wednesday night we danced in Napoleon’s former hunting lodge, Chateau du Lac, on a pretty pond in the Bois de Vicennes. They call it the Milonga Imperial. I wonder if Napoleon ever danced here? Judging from his supersized ego, he was probably one of those unfortunate types who always seem to be dancing with themselves. Doesn’t he know it takes two to tango?

Napoleon hunting in the forest of Fontainebleau, 1807

I did manage to come up with a picture of Napoleon hunting… seems like he had a whole regiment tagging along. Wouldn’t that scare off the deer? If Napoleon had been the humble sort who took the time to make offerings to Diana, Goddess of the Hunt, he might have had more luck bringing home the bacon. 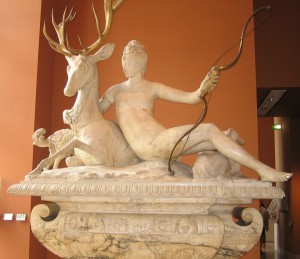 No hunting at this la Milonga Imperial, only shy cabeceos. After three weeks in Paris we have danced at a variety of milongas. Paris Tango dancers are a friendly bunch, despite the language barrier. They seem to be quite as addicted as we are, and they come in all colors and flavors, the usual package mix, from beginners to…  well, let’s say experienced but not quite ready for stardom, with no plans to morph into instant tango teachers anytime soon — in other words, dancers just like us! 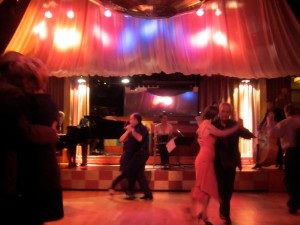 Parisians can milonga every afternoon and evening at a multitude of venues. There’s lots of milongas to choose from: at least 10+ choices on your average weeknight, and on the weekends, wow! <tango-argentin.fr> lists 0ver 80 milongas every week, a handful of which also have prácticas every day! At least half of these are what we call Matinee Milongas; from 4 or 5 pm to ’round midnite. Parisians don’t tend to milonga past 1, because the Metro quits running at 1:30. And don’t think you can just grab a cab if you’ve missed the Metro; you will definitely turn into a pumpkin or worse; ’cause cabs are scarce, except near luxe hotels. And soooo expensive. But evenings in the City of Lights… just amazing! Especially when atmospheric conditions fuse with technological genius… voila!

The nightly Paris light show is brought to you by an elite team of high tech engineers. Way to go Paris!

Tangueros here use some variation of the cabaceo; however, when it comes to dance floor etiquette… it’s the Tour de France! There seems to be very little interest in maintaining your own little bubble and going round and round in the bigger bubble. All evening long people are passing on both sides, bumping and bulldozing. Ben says it’s amazing they have as few collisions as they do; but then the French have always been good drivers. Unlike San Francisco and Buenos Aires, Paris motorists don’t try to run you down in the street!

A rather swell 4-pc Tango orchestra played for 2 whole hours at la Milonga Imperial. I didn’t catch their name… blame it on my nonexistent French! I don’t savvy word one except merci and vin rouge. It’s a girl group:  3 women (bandoneón, piano, violin) and a token male (contrabajo). They were pretty good! Live music gets a star rating from us! We also like milongas with a good floor and great atmosphere: give those 2 stars. A bar, café or restaurant adds a star; and top-notch DJ’ing gets one too. Maybe we could create our own milonga rating system and sell it to TripAdvisor? Tango Tours R Us? Seriously, though, our friends in several Tango communities are going to be asking… what do Parisians wear to milongas? The answer is: Parisians dress more or less the same as they do in LA, New York, Buenos Aires, or your local dance studio… from boho chic to very elegant. However, no jeans were spotted at Napoleon’s chateau-restaurant.

The other night we walked by Porte Saint-Denis on our way to Milonga 323. It’s an historic area full of beautiful old buildings. Porte Saint-Denis, built in 1672, was one of the gates into Paris, like the Arc d’Triomphe across town. It replaced a medieval gate built on the same spot by Carlos V in the 1400s. Milonga 323 has a good floor, but there were only 4 or 5 couples there. The organizer was a petit young woman with a mop of golden-orange frizz; she fussed over us like a hyperactive poodle! She seemed to be trying very hard to attract more people to her milonga. Apparently we missed a big tango event that same evening; thus the poor turnout.

Milonga L’Esprit has a crazy guy that dances in the center of the dance floor, although you couldn’t really call it dancing: he just bounces back-and-forth from one side to the other, and jerks his don’t-know-any-better partners around. I guess he’s famous cause we were warned about him before we left Buenos Aires! Yep, he exists! Probably wears an invisible shock collar so if he tries to leave the middle… Zap! Ouch!

There are plenty of workshops and classes around, and they cost plenty. We see a lot of PR announcing, for ex: Milena & Miguel, fabulous tango dancers and teachers, etc… but we’ve never heard of them. If you speak Spanish AND French, and dance tango fairly well, you could make a decent living in Paris! (Sorry, no sick days, holidays, vacation time or pension!) We’ve only met up with one Argentine tango teacher, Coco Dias. Reincarnation of Napoleon? Friendly guy, though, invited us to a private party and tango event but we couldn’t make it. Catch you next time, Coco!

Coco’s the Porteño in Paris

There are some darn good DJ’s in Paris. Some are really good (la Balbutiant, Casa de Tango, Milonga Imperial). What I mean by really good, is a milonga that sounds like the milongas of Buenos Aires. Like, the Tango Tunes Top 400. If you occasionally DJ, like I do, you know the drill. First, select your favorite tunes by your favorite orchestras, off the internet or your CD collection or your iTunes; next, you organize them, in tandas and cortinas, to make your playlist. Well, if you make up your playlist with your least favorite tunes by the same great tango orchestras, and put them all together into tandas and cortinas, that’s what I call the music at a not-so-good milonga. Lacking a certain passion, that essential flavor, el sabor del tango.

The tango scene is not the only Paris underground: there’s also the Catacombs. 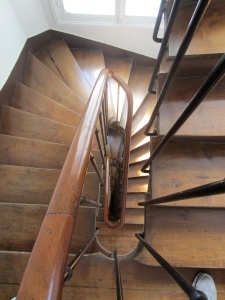 We toured the catacombs a few days ago: so many bones and skulls piled everywhere, damp stone passages, very poorly lighted… that place gave me the creeps! Ugh! Spooky! You go down down down a spiral cement staircase, 134 steps down to be precise. Not nearly as attractive as these 108 steps in our building. No indeed. They’re dank, smelly, creepy. The bones are mostly laid out in a distinctive pattern, maybe you can guess it from these photos. Are we scared yet? 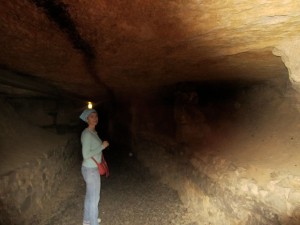 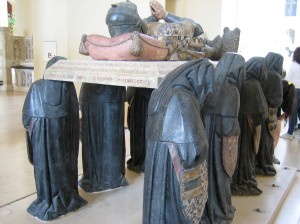 I’ve seen the catacombs under Rome and also under St. Peter’s, so I was somewhat prepared for it, (listen to me lie!) but what surprised me was how small the skulls are. My first thought was, OMG, these are children! But, passing each niche, punctuated by plaques writ or engraved on cold stone, and an occasional puddle underfoot — water dripping thru layers of porous limestone which underlies all of Paris — I finally realized that all the skulls were small, cause people were littler back then! And their average life span was about half of ours today.

Some of the quotations etched in stone are priceless, like the one about how death equalizes kings and beggars alike. 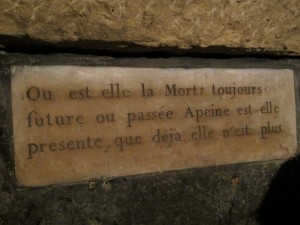 One of the workers at the Catacombs had been a prisoner for many years. During those years he came to be very fond of the view of the city from the prison. He was eventually released from bondage, and found work stacking femurs and tibia underground in the 1770s. In his spare time he chiseled the view of the city he had gazed longingly at for so long. He was killed by a cave-in; his final resting place the Catacombs. 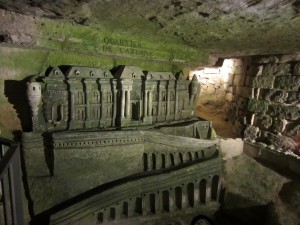 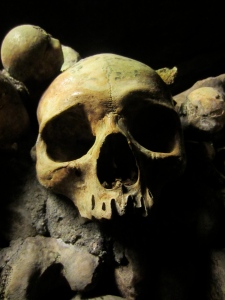 do you see what I see?

I was more than happy to climb up the 100 winding stairs and be back in the sunlight! We went to a busy boulangerie-café, had sandwiches and coffee and watched the world go by for an hour or so till we recovered from that subterranean nightmare. Ben kept making silly jokes, talking to the skulls, you know, like, hey, what happened to your brains? geez, you really lost your mind! The guy has a sick sense of humor!

After a couple of hours underground I was so over it. Here’s a cheery hasta la vista, baby!

Ready to climb the stairway to heaven? Back to the realm of the living? 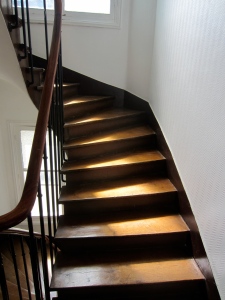 this train is bound for glory…. praise the Lord!

Now that we’ve had a quick armchair trip to the underworld, how about putting the spaceship in reverse and heading up to the finer celestial elevations? Nothing like a little music to elevate your spirits in this earthly paradise. 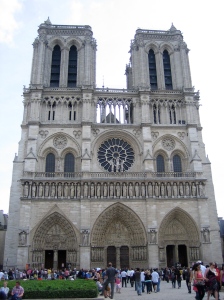 A few nights ago, a packed crowd at Notre Dame time-warped us back to medieval nights, thanks to a wonderful choir of all ages singing Bach’s Magnificat. There was musical accompaniment: several violins, contrabajo, tambourine, organ… really I’m not exactly sure because there was a crowd up there on the temporary stage, in front of the main altar. The conductor, a young black Frenchman, took care of business gracefully, dynamically, and with a reassuring smile. The thousand-year-old cathedral radiated sound like only a thousand-year-old stone and glass cathedral can do.  It felt like we were lifted up into space and touched down on the intergalactial mother ship, i.e., heaven! An unearthly celestial blue glow diffused over us pilgrims gathered to hear the choir sing Bach. Radiant joy pulsed through every single molecule I own. An awesome experience, 5 stars! 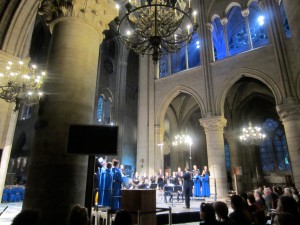 The Magnificat (also known as the Song of Mary or the Canticle of Mary) is a song of praise set to music. It is one of the most ancient of Christian hymms and perhaps the earliest hymm to Mary. The name Magnificat comes from the first word of the Latin version of the canticle’s text, which comes from the Gospel of Luke (Luke 1:46-55) Johann Sebastian Bach composed music for a version of the Magnificat in 1723. In 1724 he finished setting the canticle (i.e., the words of the hymm, in German) to music. Pretty awesome stuff! Ben took some nice photos.

stone reaching for the sky

We’re still having that tempestuous spring weather here in Paris. It’s been raining off and on for almost a week, and the forecast calls for more of the same indefinitely… maybe forever. That line about “springtime in Paris” is totally bogus. I recently discovered that Paris is north of Albany, Boston,  even Bismarck, North Dakota for chrissake! Cheyenne, Chicago, Denver, Montpelier, New York, even Seattle! Geez Louise! We had just enough warm days to figure out which milongas had functioning AC, and now we’re back to going out with jackets and umbrellas! Who planned this vacation, anyway?

Open Studios in Paris this weekend!

Have a good weekend, everybody! And remember, if you don’t like the news, go out and make some of your own! 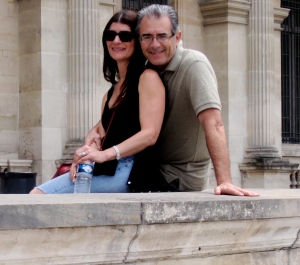