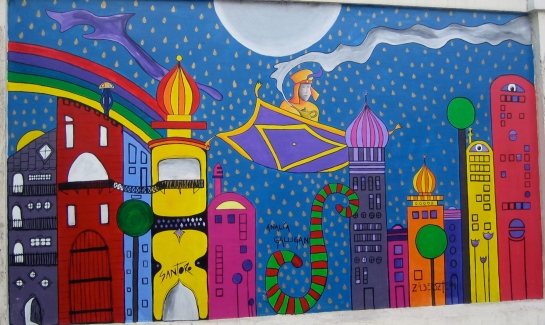 I was on a bus one day going downtown and I noticed about 6 or 7 blocks of wonderful murals, all on Sanchez de Bustamonte, in the neighorhood of the children’s hospital. So I made some time to walk that neighborhood, which is not far from my barrio, and I took lots of photos. I didn’t have much success with my investigation of the murals’ history, but it is obvious from the artists’ signatures and notations, along with the content and style of the works, that credit for the art goes to the children, and friends and families of the children, who received services in the hospital and its clinics.

I ‘ve always loved doing art with kids, and one of my dreams is to open a children’s art gallery and working studio where kids can learn to make art. Of course all children, given the simplest of resources and a good dose of encouragement, will do just that, with little prompting.

I want to dedicate this blogpost to all the primary school teachers out there, who wake early every day and dedicate years of service helping children the world over to master the tools they need to build useful, productive lives.

As a former kinder teacher myself, I have always been happily startled by the creativity of little ones… always drawing, painting (outside, please!), inventing with whatever materials come into their little hands, making their own imaginative toys and a great lovely mess in the process! 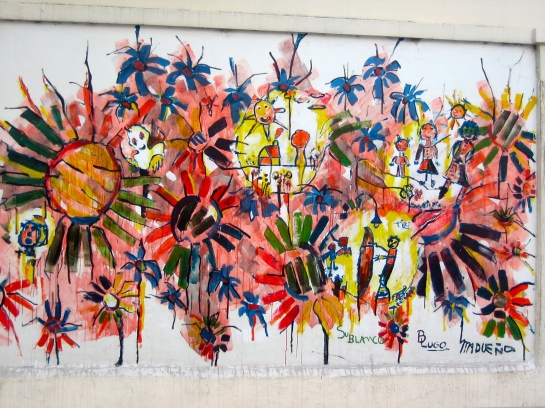 When children begin to put pencil to paper, they start off with scribbles which eventually become letters and words and illustrations.

Kids begin to read and write at an early age, and the learning curve spikes upward dramatically after they master the basics.  Pretty soon they’re writing notes and cards and lists, being inventive and showing a great deal of focus, intention and follow-thru. I won’t go into a speech about it, but suffice to say it isn’t an accident that the lucky ones who have no access to tv or video games or computers at home become the earliest and most fluent readers and writers. Their creativity is not held captive, nor is their brain development put on hold, unlike millions of small children who sit, passive and expressionless, watching pixels on a screen instead of engaging their environment with all 5 senses.

Apparently there’s no harm allowing children to watch an occasional kid flick. Isolationism runs counter-productive to healthy parenting. I heard there’s a new trend called paleo-parenting which I think was the norm a hundred years ago. “Outside, all of you! Don’t come back till supper time!”  That was the mantra I grew up with. Freedom to roam the streets, the woods, the creek… to develop one’s powers of observation: bugs, rocks, leaves, bird nests, tree trunks, coyotes, squirrels… whatever moves. And hey, what about the beach? What a breathtaking world that is!

are we having fun yet?

Some delightful parents of my acquaintance let their kids check out a movie per week from the local library. Their amazing kids can be found engaging in creative play at all hours, building, measuring, hoisting buckets of water into the air using branches and a rope for a winch, reinventing the wheel a hundred times; painting, sculpting in dirt, mud and sand mixed with water… snaring small toys or live birds with a string, a stick and a cardboard box (as we did as children) … reenacting favorite stories using stuffed animals and dolls… how much fun can you have when your brain is not programmed by television? 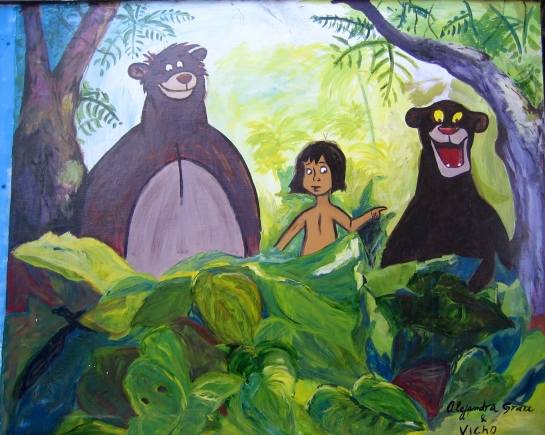 I almost forgot to mention that the aforementioned parents of my acquaintance each speak several languages, which as you know is a kind of connect-the-dots-game for the developing brain. 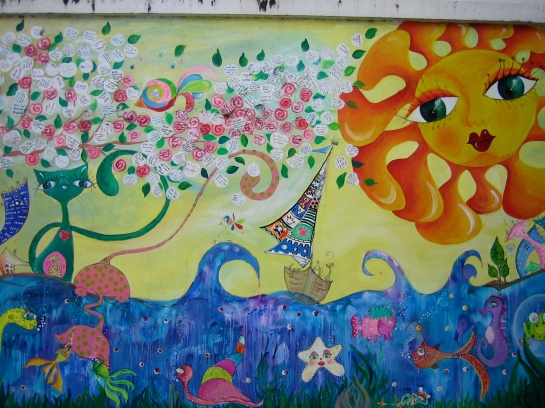 the ocean with big sun and little messages

It’s getting late. My brain sometimes runs out of words at 4 am. But there is still a herd of pictures waiting to be run into the corral.

Mary Poppins, a children’s book by P.L. Travers, was about a magical English nanny. Originally published in 1934, Disney made it into a movie in 1964 – fifty years ago.

an artistic mishmosh with tree

I love this mural, though as a work of art it could be critiqued; and my best guess is that it was conceived and executed by a brilliant teenager.  Apparently the monster lurking above was reworked to death.

Doña Primavera … a poem to our lady of Spring

At the upper left of the above mural a verse from “Doña Primavera,” a poem by Chilean poet Gabriela Mistral, is just barely visible. 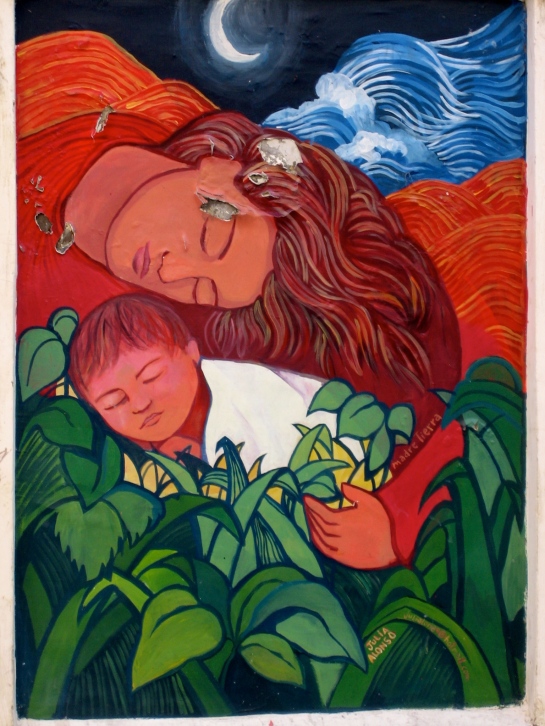 From the Earth who nurtures and heals us…

Importante dates that pass without realizing… the day you discover your future favorite author.

to the texts which lend us perspective on the world and our lives.

This last mural reminds me of a Marc Chagall painting. Delicate, colorful, yet the violent sky, the sad girl clinging to a burro… the flowers don’t look too healthy, either. What does it all mean?

I am master of my fate, captain of my soul.

LAST MINUTE NOTE: Looking for a comfortable apartment for your visit to Buenos Aires? A good friend of mine from the states rents hers out when she’s not here. It’s in one of my favorite neighborhoods and has a big sunny balcony. You can check it out at: www.airbnb.com/rooms/4650379.

Let’s close with a photo from a curious and delightful day in La Boca.

Over and out from Buenos Aires!