Opening this post with no dazzling first line was not really what I had in mind. Somebody please just toss a poetic blast of bombast at my beleaguered brain! Say what? Can you repeat that? No matter, let’s just get down to the biz of catching up on our whereabouts since we left Barcelona last August. People keep asking me, where are you guys? Well, right now we’re in Portland, Oregon. And, sad to say, many long miles from the beautiful Costa Brava, España. Here’s where we were in August 2012: along the coast north of Barcelona, known as the Costa Brava. We rented a car and went exploring.

Big Sur’s got nothin’ on the Costa Brava!

Many years ago I asked one of my uncles, in Italy, how they manage to keep Italy so clean, green and well-tended. “We toss all our trash into the Mediterranean!” he replied with head-tossing laughter! 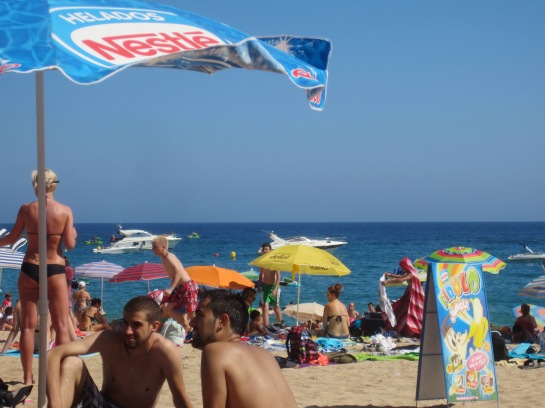 no trash in sight… just lots of gorgeous scenery!

Not trashy here on the Costa Brava, and only 116 km south of the South of France. Check it out! This beach borders the historic town of Sant Feliu de Guixols. I have no idea who that happy saint was, it’s Catalan to me.

Sunday afternoon at the beach – Renoir could have painted this

Sant Feliu has an awesome museum, the Espai Carmen Thyssen, founded by the late Baron Hans Henrik von Thyssen-Bornemisza (1921-2002), a wealthy Swiss-German industrialist art collector with an ancestral Hungarian title and a villa in Montecarlo. The museum is named for von Thyssen’s fifth wife, Carmen “Tita” Cervera, a former Miss Spain, whose art-loving instincts played a key role in bringing her husband’s valuable collection of nineteenth century Andalusian and Catalan art to Spain. 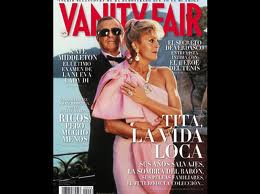 The museum entrance is on the right. Behind the arch is the 10th century Roman monastery, built over the ruins of an old castle which saw plenty of action back in the day. Apparently the monks were occasionally  called upon to drop their rosaries and defend their turf from marauding turks, moors and other riffraff, with arrows shot from narrow openings in the high walls. 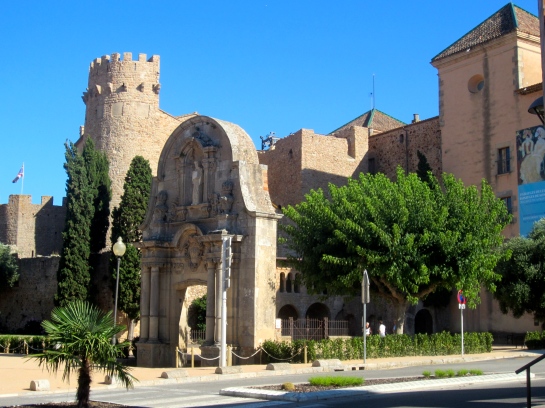 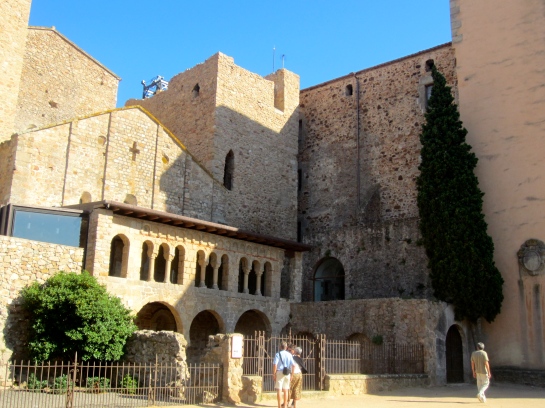 Quite the jetsetting playboy, Baron Thyssen once famously explained his surname: «Bornemisza significa que no bebe vino, y yo más bien debería decir que no bebo agua». (“Bornemisza means “doesn’t drink wine,” but in my case “doesn’t drink water” would be more apt.”) The Baron also has  museums in Málaga and Madrid. In the 1980s he created a foundation to prevent his fabulous collection being dismantled and sold off to private collectors. My mom, a retired art critic, reminded me that she interviewed Baron von Thyssen when  he visited the San Francisco Museum of Modern Art, accompanying an exhibition of his personal collection. 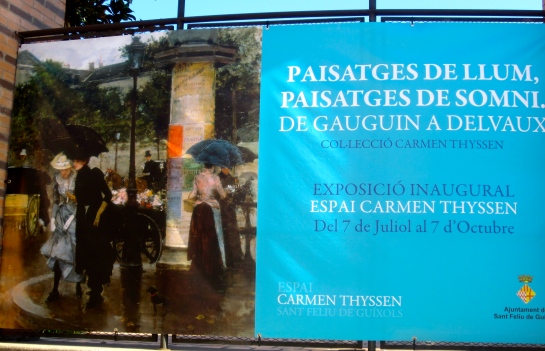 PR for the fabulous inaugural exhibit at the Espai Carmen Thyssen. What a gorgeous day, and filled with spectacular art. The above painting made me nostalgic for our time in Paris: it rained so much last spring.

The Baroness Carmen Thyssen said of Sant Feliu: “…her dazzling beauty and  joyful people I found captivating from the first.”

Adios, España! In late August we flew from Barcelona back to Paris and on to San Francisco. After visiting family and friends in California we took a month-long break in beautiful South Carolina.

From Charleston — where I could stay forever — we drove south to Murrell’s Inlet for a vacation from the vacation! A restorative, off-schedule downtime of surf, sun, sleep & fresh seafood prepared by Chef Ben. 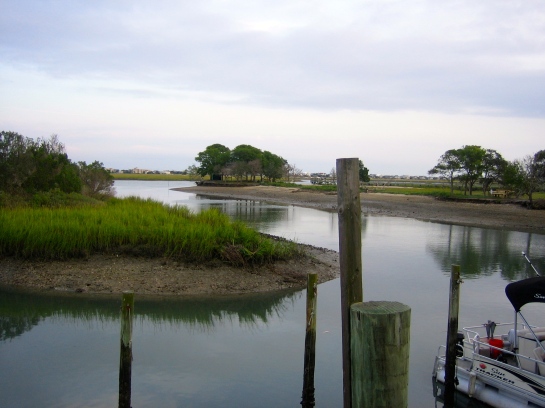 late afternoon on the inter-coastal waterway 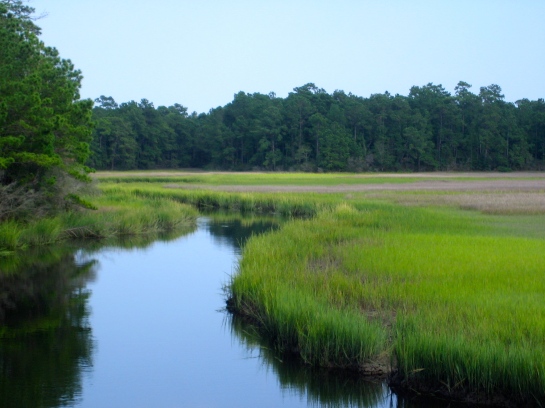 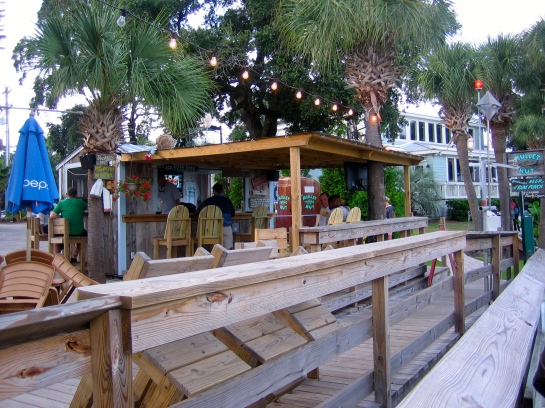 we spotted a dockside watering hole.

Art on the docks 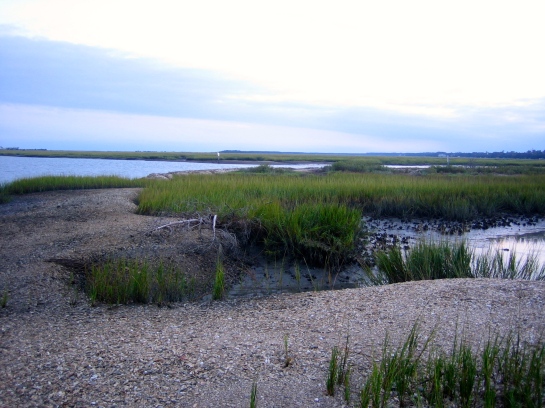 even a pirate ship!

we head off into the sunset

South Carolina was wonderful last september, with its sizzling beachfront and dripping wet hot humid weather… I loved it! But eventually it was time to move on… 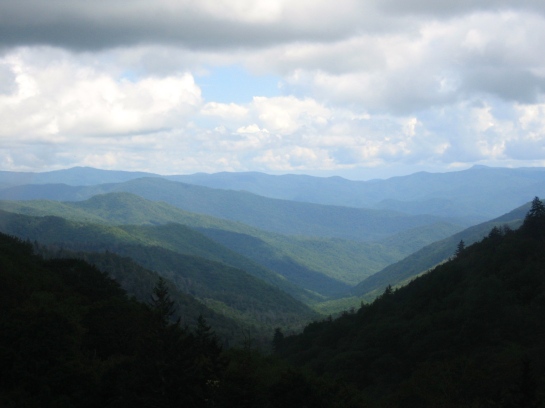 we spent a few days in the Great Smoky Mountains

we tango’d near the Capitol Dome

We milonga’d in DC one night before heading to New York state. It was a warm and beautiful night in DC, and really cool to be dancing in Freedom Plaza, with the words of Martin Luther King Jr. engraved on the stones beneath our feet. The next day we drove through northeastern Pennsylvania over into New York, and then more or less followed the Hudson River Valley north, bypassing New York City, Connecticut, and Massachusetts.

the old homestead in PA 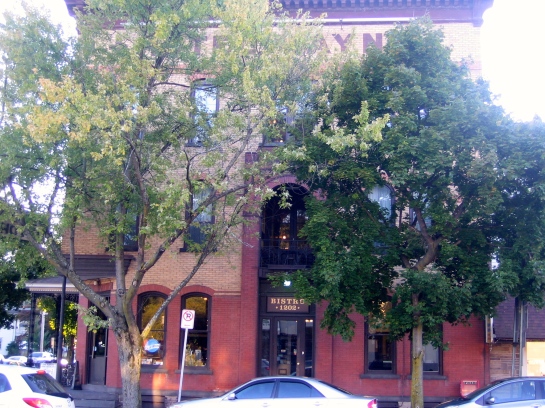 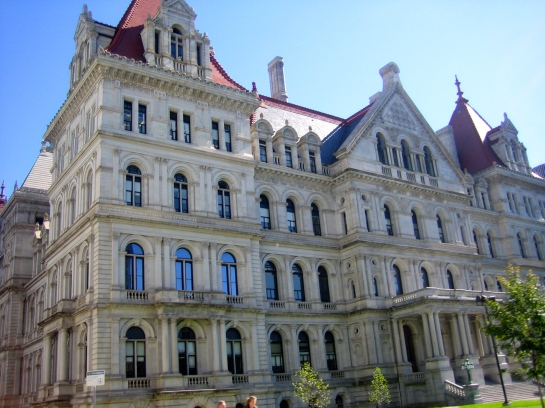 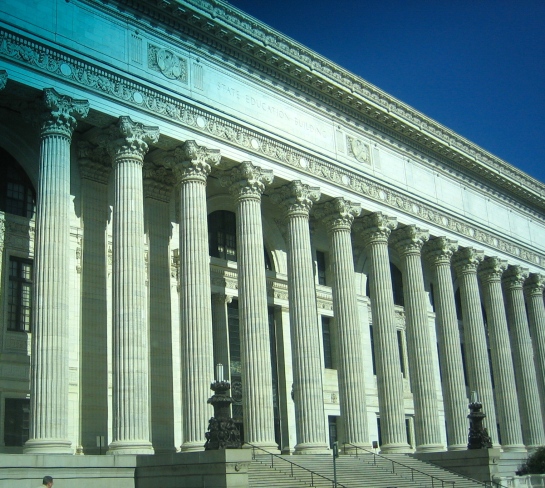 The frenetic grease-dripping fast food twilight zone of a cross-country road trip finally came to a standstill when we took up lodgings in Montpelier, Northeast Kingdom, Vermont. Time slowed to a crawl. We woke up to shorter days, longer nights, cafés and restaurants shutting down so early — and this is the state capital! (pop. 8,000) People actually watch TV and play board games in the evenings. Not to be left out of all the fun, we picked a free tv (the formerly glorious, heavyweight color tv, so impressive back in 1965!) and signed up for cable… like hooking up a one-way IV sucking down your bank account. That lasted a couple of months till we went back to watching news and soccer matches online.

Vermont was picture-postcard pretty! Ben started artisan bread-making classes at the New England Culinary Institute. We found a 3rd floor apartment in a 100+ year old house downtown. Pretty comfy, though we only had a bed, a kitchen table, 2 chairs and some cardboard boxes. When we arrived in October the leaves were turning and the days were still pretty nice, not really too cold yet, the nights just barely dipping into the 40s. 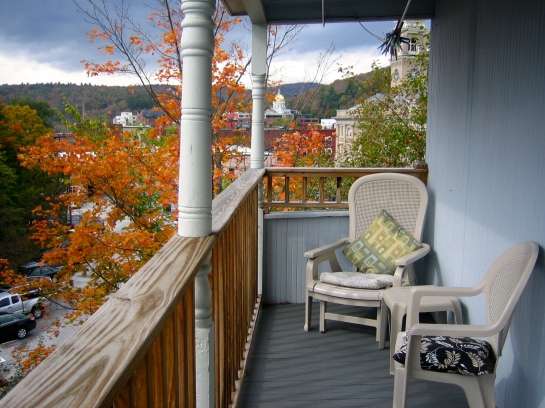 Ben enjoyed his breadmaking classes at NECI, though the expectation level was decidedly a few rungs below his experience at the French Culinary in Manhattan a few years back, where highly paid world class egomaniacs belittled & berated their students’ efforts…  turning out some highly trained professionals nonetheless. A little constructive criticism can be a useful part of the learning process… ouch! Every day was a blast for Ben; he even enjoyed trudging through the snow to be at the bakery at 6:00 am. He was lightyears beyond most of the students… mostly mouth-breathers, you know, adolescents with perpetually hanging lower lips. When he had extra time (he’s fast) the chefs let him do his own thing, and he made the most of it: croissants, pan au chocolat, marzipan pastries, escargot, stollen, panettone… you name it. Lots of yummy stuff… not to mention a million varieties of artisan breads, made the traditional way. Like, the way they make it in Paris. Voilá! 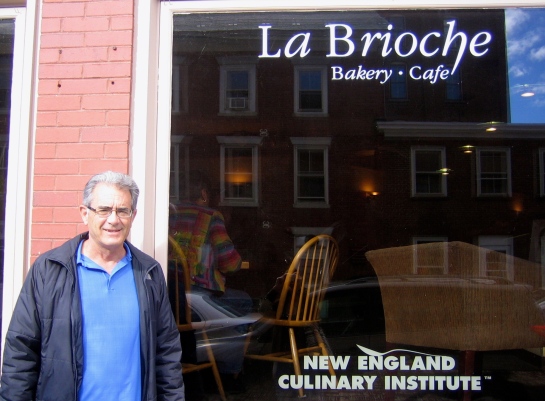 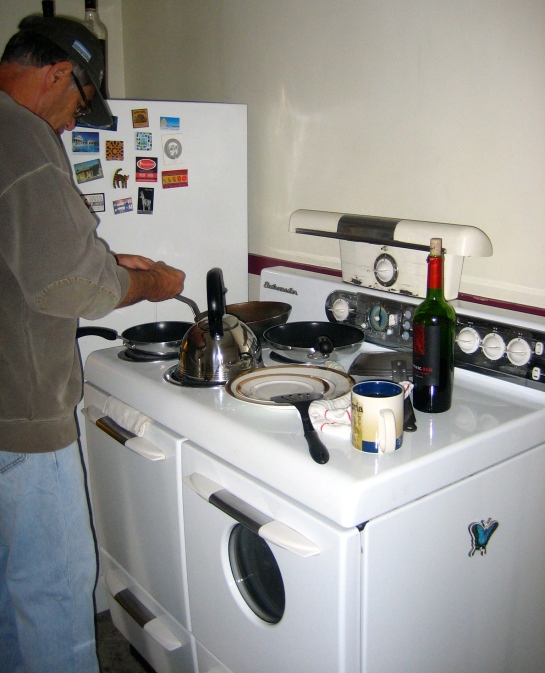 Yeah, he loves to cook and the kitchen always looks like a tornado’s touched down, but it’s worth it. Delicious! Notice the way cool 1950s electric stove? The oven window looks like a porthole on a spaceship. My spaceship! 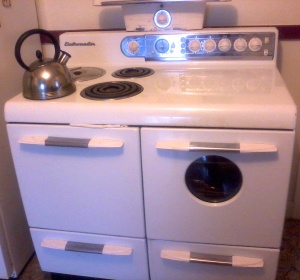 The door on the left is a warming oven, and the rear left burner is a deep well with a built-in soup pot. Crazy! Some nut will pay big bucks for it on eBay someday!

Speaking of tornados, we were in Vermont when Hurricane Sandy tore up New York and New Jersey.

She was just a breath of whispering wind by the time she reached northern Vermont — lucky us.

Fall colors in Montpelier… flaming red, orange and gold. There were still a few warm days but not for long… the days got shorter and colder, and there wasn’t a heck of a lot to do after dark. Burlington had a small tango community, but their milongas were not what we were used to — sorry, friends! Although we did have a fabulous evening at the Palais de Glace Holiday Milonga, in Stowe, and a New Year’s Eve Milonga with live music (and a hysterically funny skit!) in Hartford, Connecticut.

he’s gotta quit flirting with the waitress… or there’ll be hell to pay!

Three months in a deep freeze was a little much for me… I’m a California girl! Snow is exquisitely lovely, of course. Making cut-paper snowflakes is my idea of a good time in the snow. Furnishing our apartment was kind of fun, though. We found this really awesome blue ultrasuede chair at an estate sale: 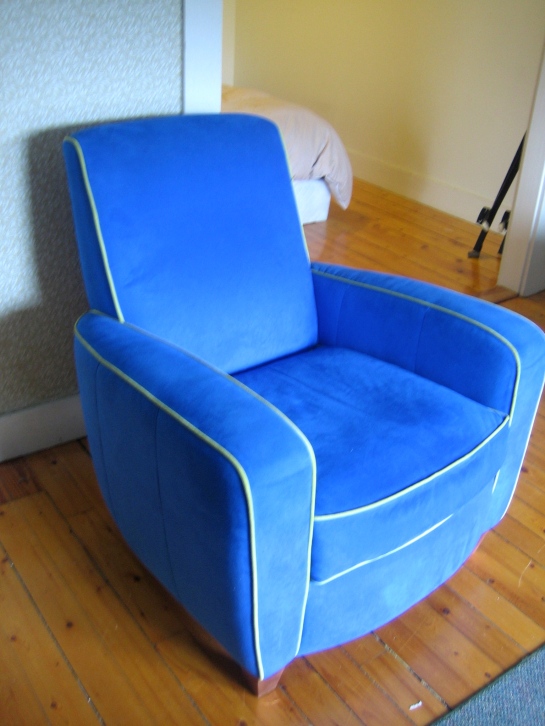 with lime green piping… and a matching couch 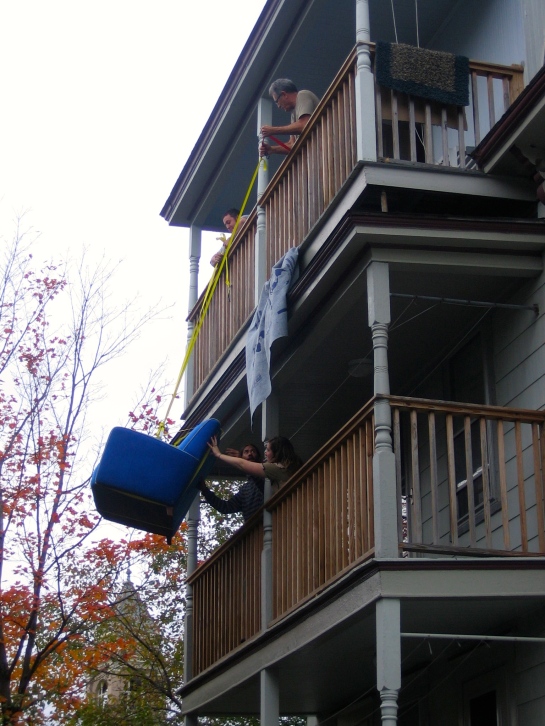 Getting it up to the apartment was a challenge

Needless to say, the winding steep and narrow stairs up to our spacious atelier in Montpelier would not admit the couch, nor the bed. Lucky for us when we moved out three months later the new tenant took it all. I kept picturing how much fun it would be, rappeling all that furniture back down in the snow.

fast forward to snowy night on our street

Beautiful Montpelier Round Porch and Tower

Before long our world became an exercise in whiteout conditions, arctic blasts, ice showers and icicles, frozen cars, frozen streets, sidewalks and noses; woolen mittens and lost kittens, gloves, scarves, wool caps, snow boots, layers upon layers of the warmest stuff you got… fleecy jammies and bathrobes (or my version: just drag the blanket around the house with you), down jackets… and don’t forget sheepskin booties for indoors. Snowy winter holidays prevailed. But before all that white stuff covered everything, we took a weekend trip in Maine, including a stop at L.L.Beanville. 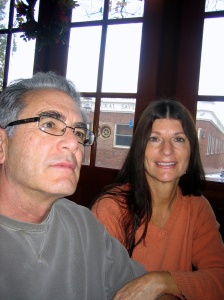 having dinner in Bath, Maine 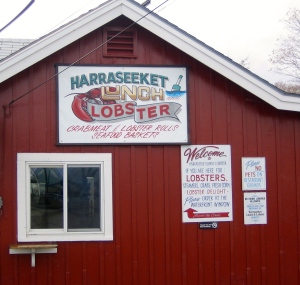 Home of the Lobster Roll 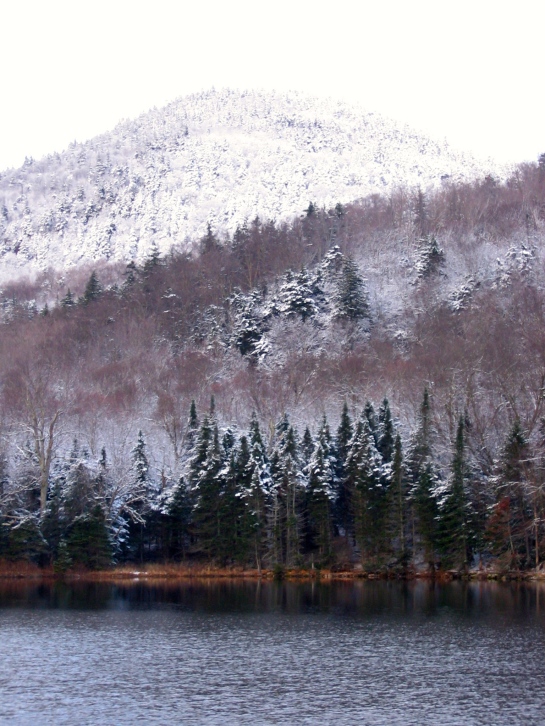 Brrr! Those were cold days. 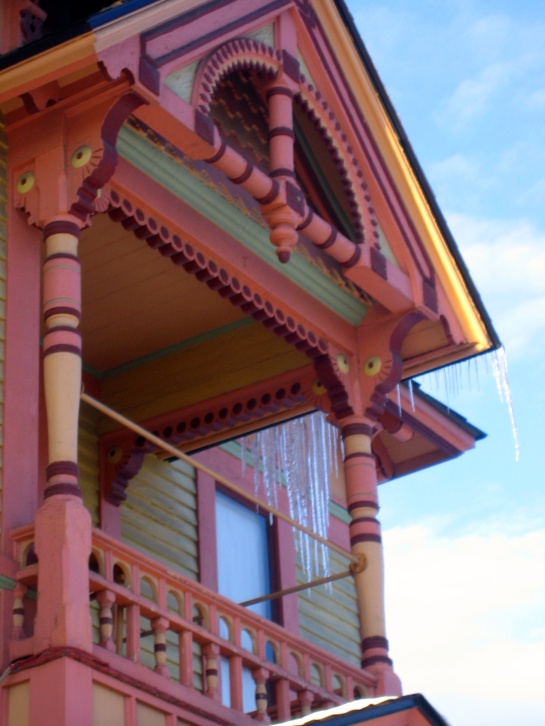 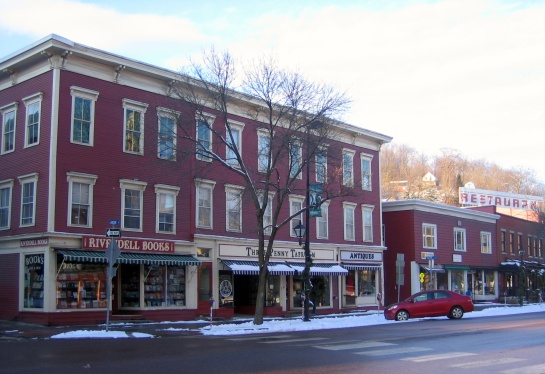 my son and grandson hiking 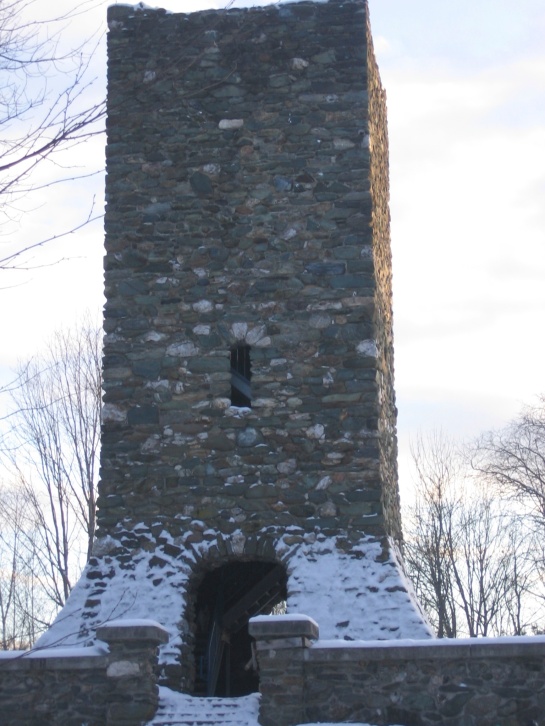 view from the tower

a snowy evening in Montpelier: our apartment top floor 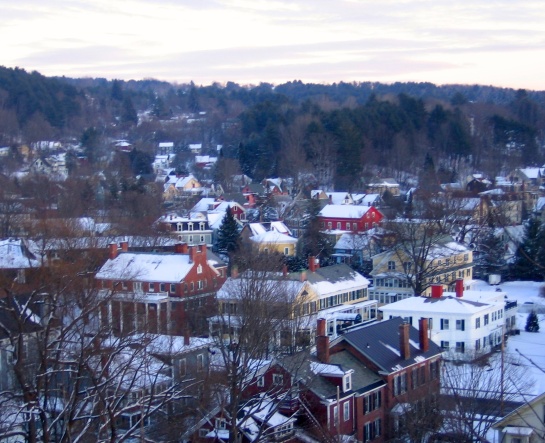 We left Vermont in mid-January, driving across the frigid Midwest. Mile upon mile of frozen highway: bleak, cold, heartless. Miraculously, we only met one snow storm, near Buffalo, NY. It lasted less than two hours. I parked us in the draft of a big semi and hung onto his coattails till the storm eased up. We kept to the northern route: Buffalo, Chicago, Omaha, Cheyenne, Boise… all the way to Portland. One evening we found a great little milonga in Lincoln, Nebraska… what a pleasant surprise! The Milonguero Spirit appearing in a place previously disguised as Nowheresville! No wonder… the home of the Univ. of Nebraska Press. Publishers of books and journals specializing in American history, the American West, and Native American studies. (Lewis & Clark fans, take note!) Our next destination: Portland, Oregon. Stay tuned!