Springtime in the city could not be more beautiful than it is right now.

Jacarandas in the Palermo Bosques

The city is blooming, blossoming, growing and greening up everywhere. 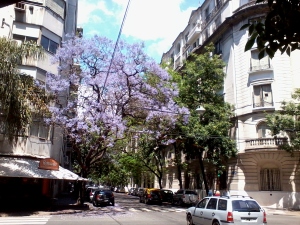 a favorite corner of our barrio 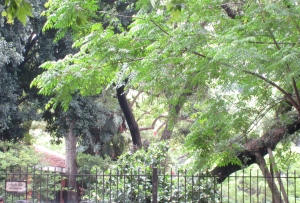 People are outside en masse.  On the weekend bikini-clad girls catch rays on the “beach” grass at Parque Las Heras, which means the boys aren’t exactly in hiding, either.  Our neighborhood Latin lover in the cute French mansion across the street struck this pose one warm day: (click to enlarge!)

have a nice day!

Do I have a view or what?

What a wild ride we’ve been on lately!  We dropped off the radar due to an unforeseen medical crisis.  My tango partner is much better now, and healing up from surgery.  In fact he’s watching his favorite tv show as I sit here and blog: the soccer channel.  The weather lately has been humid and warm, in the low 80s, with frequent warm tropical thunderstorms.  What delightful weather!   How spontaneously it transforms this great city!

The nice weather is perfect for vintage vehicle viewing:

This clean baby blue Fiat is tinler than my Mini Cooper! My ex-mini, that is.  Don’t you hate it when your car makes it to almost 150,000 miles and then gives up the ghost?  Yes, it happened to me. So sad. But, what the heck, who needs a car here in this public transportation paradise?

Anyhow, when I get back to the states I think I’ll look for an Isetta! If it breaks down I can probably hitch my horse up to that front bumper. And if the obsolete post-industrial technology of a 1-cylinder gas motor really pisses you off (you tree-hugger you!) how about a multi-tasking red trike?

Oops!  wait a sec….  I almost forgot to upload this one-of-a-kind Isetta RV: 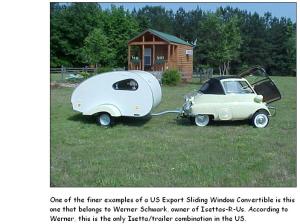 can we be camp hosts at Legoland?

Your house mouse could drive this!  Didn’t Stewart Little leave Central Park in one of these, on his first excursion?  His first brave blast-off into the unknown?

We have seen some great music lately, though we have not been dancing as much. A temporary setback, friends, not to worry!  Sometimes you just wake up one day and find yourself on a strange bunny trail. Or you were already on the journey without realizing it. Turning back is not an option, so you keep going, and if you find yourself at “the garden of forking paths” (great story by Argentine author Jorge Luis Borges), it’s a good sign, because you begin to see new options peeking through doors A, B & C, opening to adventures you’ve never even dreamed of!  All of a sudden you’re looking at the world through a remarkably different lens.  The universe has gifted you a re-positioning of your cosmic road map!

Here’s the happy guy, after the doctor told him he could leave the hospital the next morning: 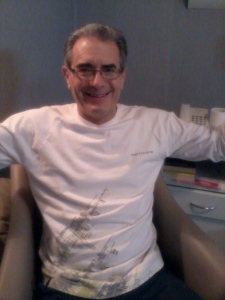 Ben wanted go dancing his first night out of the hospital.  How can you say no to a guy who just got out of lock-down?  We danced a little… and enjoyed just being together with no medical staff in sight.  Here he is in the doctor’s office, helping buy another Ferrari:

The other night we saw Los Primos Gabino with Fado/Tango singer Karina Beorlegui at Catedral. Their music is an inspired mix of tango nuevo and fado. I don’t mean a melding of the genres; some of the songs were fado (no one danced to those, except for a beautiful demo), and some were tangos (people danced). We liked them very much. And Catedral? I love that milonga, not for its dance floor, which is hazardous, but for its essential wabi-sabi nature (I see the sabi, but where’s the wabi? says Ben). Very funky to say the least, but also glorious in that transcendent industrial-artsy-chic sort of way. I’ll try to get in there early one day and take some photos while there’s some natural light. The massive inflated red plastic beating heart the size of a volkswagen hanging from the rafters could be the photo of a lifetime. Looks like someone borrowed my old vacuum cleaner hose to make the arteries running in and out. I’m not kidding!

Another cool spot about town is La Esquina Aníbal Troilo. It’s a café-restaurant full of art and memorabilia of the famous bandoneon player. Troilo kind of turned into a toad when he grew up — an Argentine Diego Rivera, full of genius but not a looker!  — yet he recorded some of the best music of Tango’s golden age.  The café is downtown, on the corner of Paraná and Paraguay.  There’s a bust of Troilo across the street. Don’t go there for the food, but the coffee’s good and the decor is priceless. 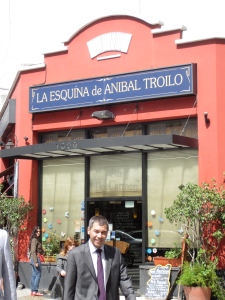 who is that guy?

lotsa stuff on the walls 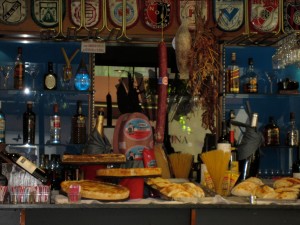 my favorite - Troilo with his dog!

Esquina Aníbal Troilo is a block from Corrientes, and only a couple of blocks from Zival’s on Callao and Corrientes: the holy shrine of Tango CDs!

On Halloween my dear friend Roxy arrived from California.  We sure had some catching up to do!

hanging out in the apartment 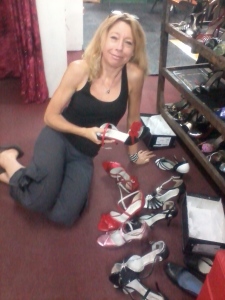 And Roxy, aka 365 Days of Tango, a seriously addicted milonguera from Los Altos (hey!  that’s where I’m from!), at Darcos:

I think I'll take all of them!

How hot are these?  NeoTango has a definite edge!

Our first night on the town with my homegirl, we went to Café Vinilo to see Orquesta Victoria, one of our favorite young up-and-coming tango orchestras.

The singer is Augustín Fuertes, of the Fuertes-Varnerín duo.  Besides being a really good tango singer, he has a streak of stand-up comic that’s too funny!

They just got back from their 3rd European tour.  Here is the other half of the duo, Ariel Varnerín.  He has his own style, great voice, not as flashy.  The two of them could be Don Quijote and Sancho Panza!  I love their fast-paced duos with guitars and voices in harmony.

After La Milonga del Bonzo we took Roxy to Canning.

Roxy and I had an adventure the day we went to check out Pulpo’s apartment.  You’ve probably heard of him or taken a class — Norberto Esbrez, el Pulpo (the octopus: known for his slinky leg wraps and other sinuous tango moves).  We picked up Pulpo’s good friend Marcela. She’s an awesome tango dancer, teacher, judge of tango competitions, and the keeper of the keys to the apartment.  Since Pulpo is usually away teaching tango, his apartment is empty most of the time, and he offered it to Roxy.  Well, we sure had a hard time getting inside. The door had three different keyholes, and we couldn’t get the various keys to work.  After about twenty minutes we were praying and singing and finally… poof! like magic! … it opened.

We went in and surveyed the mess, the apparent emptiness and piles of unwanted stuff left behind by someone who had broken in.  The vibes were wierd, disconnected, discordant.  We opened up windows and the doors to the balcony to let some fresh air in but the breeze didn’t seem to help… the street was noisy, the air was full of exhaust fumes and dust from Puyehue, the volcano in Chile that’s been spewing ash all the way to the Atlantic. Luckily Pulpo’s box of tango shoes was still there:

and you thought girls were shoe-crazy?

it looks better in the photo

We decided the place was not going to be ready for the girls to move into any time soon.  We thought we could just leave and lock the door and be done with it, at least for the time being.  Wrong!  We couldn’t even get the door shut!  It was really heavy and the top hinge pin was broken off. The door was hanging away from the frame and dragging on the floor. We tried to push it up and back into place but it was too heavy.  I began to think we had morphed into a scary movie!  We couldn’t get out of there!

Roxy thought she could lever the door up with a plastic squeegee. You go, girl!  At this point we were all desperately hungry, and desperate to get out of there!  Not to mention laughing hysterically like zombies on auto-pilot.  Just look at them!  Twinkling like a pair of house elves! 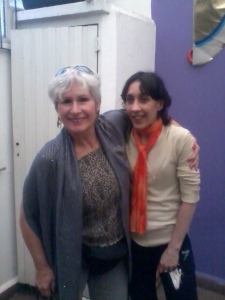 we tango and work on doors!

Roxy and I finally got away but Marcela had to stick around until the locksmith showed up.  A few days later Lynne and Roxy found a sweet apartment a few blocks away from us. 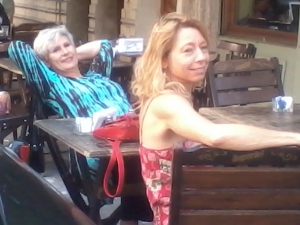 We had a some really fun all girls’ days…

jacked up on coffee

and girls’ nights out!

So sad they had to go home so soon!  So lucky I can stay here in this beautiful city of a thousand nights!

5 thoughts on “Back on the radar”